The route of the 2017 Tour of Britain has been officially unveiled, with a numbers of firsts in the British stage race’s history. Edinburgh will host the opening stage on Sunday, September 3, for the first time, with Cardiff hosting the finish of the eighth and final stage on Sunday, September 10, for a conclusion in Wales. Not since 2012 has the race has finished outside London.

British independent energy supplier OVO Energy will be the race’s title sponsor. ITV4 will be broadcasting live television coverage of the race, with three hours of live coverage each day plus a one-hour highlights package. Twenty teams will line up for the race, with an announcement of the squads taking part due in the summer.

Location of the Stages 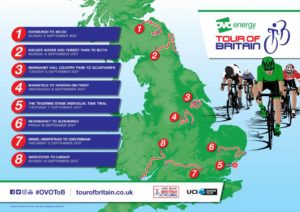