Serbia’s EXIT Festival is the one-upper of amazing locales – Novi Sad’s 17th century fortress that mixes up a beautiful setting and unparalleled musical offerings. This heavyweight combo earns EXIT the distinction as one of the most sought-out summer music festivals in the world. While it may now be divorced from its roots as a base for activist culture, EXIT still represents a way of life and a way of thinking. The EXIT village promotes this way of life; it’s the beach home to all patrons of the festival throughout its five days. Besides mainstream acts, EXIT hosts a diverse array of artists, including representatives of underground electronica, metal, punk, and experimental genres.

The roots of EXIT lie in student organization, particularly three university students from Novi Sad, Dusan Kovacevoc, Bojan Boskovoc, and Ivan Milivojev, who established the first EXIT Festival in 2000 as a means of protest against the sitting government under Slobodan Milosevic. The idea was that this festival would be free of corporate sponsorship and a secure platform for educating the Serbian people about corruption and alternatives to its existing political structure, all while partying to some good local tunes. The name was coined from a slogan recalling the Milosevoc regime, “exit out of ten years of madness,” indeed there has been a shift in the madness from intolerance to ecstatic celebration. This festival was not only an important catalyst for change, but a cathartic way for a nation to collectively heal from the atrocities of one of Europe’s most recent wars.

Milosevic is long gone and the current administration of EXIT organizers are certainly not above taking a few corporate dollars to fund their event, with the festival attendance swelling into the six figures region. Still, many festival-goers and bands are attracted to EXIT, if only for its magnetic locale. Every year since 2001, the festival has taken place at the national landmark, Petrovaradin Fortress, located along the right bank of the Danube River. The fortress itself is an impressive 17th century stone edifice perched atop a hill overlooking the city of Novi Sad, Serbia’s second largest city. One of the benefits of a music stage built in a fortress is that the stone walls provide superb acoustics, much like the natural amphitheater of Red Rocks, Colorado. These castle walls rock! 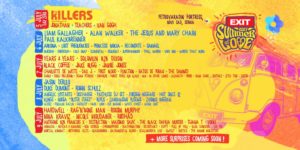