One year since her untimely death, MAXXI is devoting to her The exhibition Zaha Hadid in Italy. Focusing on Hadid’s projects in Italy, the exhibition highlights her intense and productive relationship with our country, presenting projects and works created by means of various instruments of representation, research, and experimentation that she honed in the course of her career; from pictorial and conceptual sketches to three-dimensional models, from virtual representations to the more recent interdisciplinary studies addressed to the application of new solutions and technologies, in a pioneering effort of investigation in design.

The exhibition presents a portrait of Hadid’s multifarious personality, it is conceived as a walk through; starting from the built work and projects in design development in Italy, to product design. The gaze of Hélène Binet, a photographer who has been one of the most mindful of Hadid’s production over the years, interprets the strength and the dynamism of the architecture with a series of intense photographs that provide new details of her works. The constant drive towards an interdisciplinary search for new design methods is also presented in the sections dedicated to CoDe (Computational Design) and to ZHA Design DNA, a window on the creative legacy that the studio has fully welcomed. To paraphrase Zaha Hadid, there should be no end to experimentation.

In addition to the Italian projects that constitute the backbone of the exhibition, a selection of other projects that made up a significant transition in the evolution of Zaha Hadid’s language and architectural research are also on display, from the very beginnings to the more recent works that are still under way. In this evolution, the Italian projects have often represented a juncture and a turning point towards new research and experimentational horizons. MAXXI is the most evident proof of this. 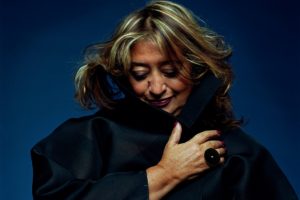 Zaha Hadid was born in Bagdad and graduated in Mathematics from the American University in Beirut. She then moved to London, where she studied architecture at the Architectural Association and obtained her degree in 1977.
Her work is a revolutionary research bordering on town planning, architecture and design. Her innovative way of representing the project overturns the way we examine space, revealing new potentialities; it bestows on traditional elements of construction unforeseen communicative capabilities; it gives shapes new strength and dynamism. Her interest lies in the boundaries between geography, architecture and landscape, and her projects integrate natural topography and human-built structures, through a project path that capitalises experimental technologies. The lines of Hadid’s architecture are oblique, broken and elusive, the angles are mostly acute, the surfaces smooth; volumes are fractured and recomposed according to new orders, which stem from her efforts to create fluid spaces.
Hadid began her own practice in London in 1979. In 1986, she won the competition for the Kurfurstendamm in Berlin and, in 1989 the one for an arts and communication centre in Düsseldorf (1989). Among her completed projects, besides the MAXXI in Rome (1999/2010), are: the Fire Station of the Vitra Museum (1991/1993); the LF One Pavilion in Weil am Rhein, in Germany; the enlargement of the Ordrupgaard Museum in Copenhagen (2001/2005); the Rosenthal Center for Contemporary Arts in Cincinnati (1998/2003); the Phaeno Science Center in Wolfsburg. She has been especially active in Italy: among her most recent projects are the Salerno Maritime Terminal (2000), the master plan and City Life Tower for Milan’s Trade Fair (2004) and the Messner Mountain Museum in Plan de Corones. These are only a few of the projects Hadid has completed in her intense career, projects that can be analysed through three concepts: metaphor, as in the translation into architectural space of elements of the Information and Technology Age; space itself, generated by the same principles that model natural environment; and the idea of landscape, which is modelled by digital design to give life to complex, unusual and sometimes paradoxical images. Among her many awards, Hadid was the first woman architect to win the Pritzker Prize in 2004.