Exhibition: Michelangelo Pistoletto – One and One Makes Three

In the context of the Collateral Events of the 57th International Art Exhibition – La Biennale di Venezia, the Associazione Arte Continua is pleased to present a show by one of Italy’s most internationally representative artists, Michelangelo Pistoletto.

Amidst the artistic cornucopia that is the 57th Venice Art Biennale, where apart from the main venues of the Arsenale and the Giardini, every palazzo, campo and basilica is a potential gallery, resulting in sometimes overwhelmed visitors in need of a little guidance as to which exhibitions not to miss. One such exhibition is “One and One makes Three” at the Basilica di San Giorgio Maggiore, a retrospective exhibition of internationally recognized Italian artist Michelangelo Pistoletto. Realized with the support of Galleria Continua, in collaboration with Abbazia di San Giorgio Maggiore – Benedicti Claustra Onlus, and covering the entire era of his creative oeuvre, from the early 60s to his most recent works, the exhibition showcases both Pistoletto’s evolution as an artist and his modus operandi where art is an act of intervention, liberation and social exchange. 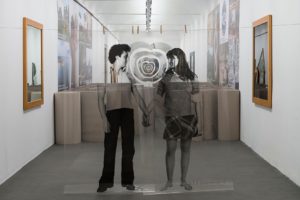 A key figure in the development of conceptual art and protagonist of the Arte Povera movement, Pistoletto gained international acclaim in 1962 with his “Mirror Paintings”, a series of works made out of a sheet of stainless steel, polished to a mirror finish, onto which an image is applied. Hung flat on, or slightly above, the floor, the “paintings” create a doorway that allows communication between art and life through the reflections that place the viewers into the artworks, thereby demanding their participation.

These works marked a career-long love affair with mirrors in terms of output, paintings, sculptures and installations, and theoretical reflection. For Pistoletto, mirrors constitute an image of the world, both of people and society, and of cosmic space, making these works a “self-portrait of the world”—a fitting description considering that the idea arose while he was creating a series of self-portraits, also on display in the show, which demanded the use of a mirror. His most recent “Mirror Paintings”, also on view at the exhibition, pay tribute to the culture and people of Cuba. Inspired during a visit on the island in 2015 and its precarious transition from communism to capitalism, the works capture everyday scenes on the streets of Havana, wherein the viewer, courtesy of the mirrored background, is suddenly transposed to.

The exhibition concludes with his most recent work, “Colour and Light” (2016), a series of framed canvases painted monochromatically in bright colors upon which broken pieces of mirror have been affixed. Since mirrors, for Pistoletto, represent an image of the world, by breaking them he is dividing the image of the cosmos into many fragments, one for every single person. Hung side by side on opposite walls, viewers can’t help piecing them together in their mind, an act of re-composition that alludes to the formation of society and perfectly illustrates the artist’s belief that ultimately “the material for making art is not just canvas, wood or marble – but society itself.”