Generally regarded as one of the kinder and gentler music festivals around, Bestival grew from a smallish 10,000-person crowd during its first run to over 60,000 attendees in 2013, its ten-year anniversary. It’s got such a good reputation for positive fun that Sir Elton John agreed to perform the main stage—his first festival appearance in the UK in over three decades. 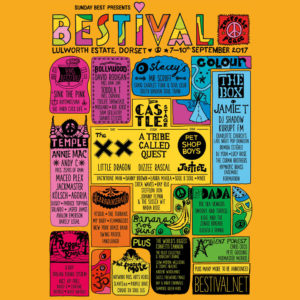 Bestival is the brainchild of Rob da Bank, a BBC 1 radio DJ who runs the festival in collaboration with his wife Josie, a graphic designer. He also owns a record label, Sunday Best (thus Bestival), that produces work for the likes of The Cure, David Lynch, and New Order. The diverse tastes of both da Banks influence the experience of festival-goers. You’ll hear a mix of EDM, indie, soul, funk and pop at Bestival, and the entire event is famous for Josie’s personal touch in elaborate stage designs, festival grounds and individual events.

Costumes play a key role here: Catholic priests wear purple during the Lenten and Advent season to reflect a period of anticipation; rituals of penance or purity are signified by wearing white, and silly outfits are de rigeur for reinforcing the sense of fun. Bestival pulls out all the stops by holding a Fancy Dress Parade each year (usually on Saturday). In 2010, revelers achieved a place in the Guinness Book of World Records by having the most people in costume at one time. There are even special tents set up offering workshops on costume making—they take the fun that seriously.

In addition to the flight of fancy costumes that contribute to the scene, Bestival takes advantage of its large audience to spread important messages on key issues of the day. Organizers founded A Greener Festival Alliance to highlight ways concert goers can reduce their impact on locations where festivals take place. On the Bestival grounds, you’ll also find the Breastival Mother and Child Chill Out Zone, a separate quiet yurt, where mothers can nurse.

Other thoughtful developments include the Boutique Campground, a step up from your typical tent camping or caravan park, that offers a wood-fired spa and sauna called Bathing Under the Sky. There is also the Come Dancing Spiegeltent, a mirrored big top tent that offers dance lessons throughout the entirety of the festival. You can take a break from enjoying live performances of top acts and step back in time to learn the Charleston, the Lindy Hop, swing dancing, and more. (At night, the Spiegeltent becomes Club Dada, an absurdist dance party.) 2013 also saw the inclusion of Bestival’s first Kickstarter funded art piece, an inflatable head of Lionel Richie. Hello? Is this the festival you’re looking for?